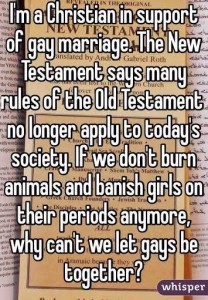 So this was another of those ridiculous facebook posts that was put up where it seems no one actually knows what the bible says.  Once again it is my job to correct them. This was my response.

Ah yes, the hypocrisy of the moderate christian and the new testament. Let’s look at what comes from the new testament.Matt 5:17“Do not think that I have come to abolish the Law or the Prophets; I have not come to abolish them but to fulfill them.“That does not sound like a renouncing of old laws it sounds like a confirmation of them. It is very nice to see that many Christians are coming around on the gay marriage issue. Much like they did on interracial marriage and slavery. Here in Florida and many other states the law that was passed that recognized marriage as one man and one woman was done because of popular vote. The difference between the westboro baptist church and the “moderate christian” who voted for the one man one woman amendment, a lack of a God Hates Fags sign. The one thing that has made me strive for hope is that the check and balance of the government actually seems to be working in that the courts recognize the stupidity and repression by large groups of people and are choosing to reject it. Hopefully Scalia will be the only dissenting voice when it does finally come before SCOTUS. I am sorry if this is not the positive reinforcement you came here looking for but the ugly side of this hasn’t gone away. They are still sending kids to reeducation camps and gay therapy programs. In lieu of that they are kicking them out of the house and on the street. The wonderful example of Christian love and forgiveness. Ah yes but that is not you. You are different. Excuse me if I look at the actions and not the words.