So I was on facebook when a beekeeper I know posted this wonderful picture that just goes to show the idiocy that exists for those who want to be close minded losers. 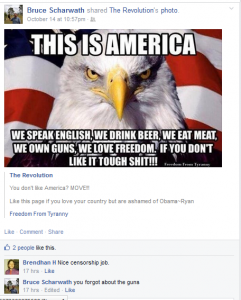 I posted a response similar to this.

As someone who took sign language in college I find your picture insulting. It goes to show an utter lack of intelligence. The line we drink beer is also crap because what most Americans consume as beer is piss and they would not know good beer if they tasted it.
The line we eat meat does not apply because there are plenty of Americans who do not eat meat. The nice thing about living in America is that we don’t all have to do the same things or like the same things. Finding that this poster comes from Freedom from Tyranny facebook group/page is funny because the line we love freedom is crap, we love freedom until there is a 9/11 or ebola scare, anything to make us sacrifice our freddoms for a false sense of security. The NSA now listens to our phone calls, follows your bank transactions and reads your internet traffic. Why? because you let it when you got a little scared.

To go with the wonderful point that I was making with the above statement what did Bruce do. He pulled the comment and effectively censored me and eliminated any idea of free speech because like most right wingers they only want their ideas heard and not any opposing ideas. I took a screenshot after I discovered he removed the post. It is amazing how many people like him exists. Where freedom only applies to him and not to anyone else.

A sad statement about how the right wing continues to be filled with losers.